For fall, the designer culled from his recent trips to Japan. 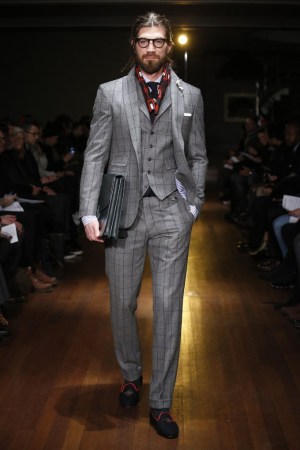 For fall, Michael Bastian culled from his recent trips to Japan. “Japanese guys are killing it these days,” he said backstage after the show. That influence was evident, and at times too literal, in a Windbreaker done in an embroidered vintage kimono fabric and a samurai-inspired trapunto white sweatshirt paired with karate pants.

But the bulk of the line was filled with traditional handsome Bastian staples such as windowpane three-piece suits, Glen plaid blazers, military green shirt jackets and skinny cargo pants, while the designer’s playful spirit came through with a Godzilla-embroidered cashmere sweater. Other lush fabrics included lamb suede for cardigans, rich shearlings for flight jackets and silk brocade for tuxedo jackets.

“The key opportunity today is in luxury sportswear, and not many Americans are doing it,” Bastian said.

With his Gant collaboration coming to an end after this season, Bastian’s return to his high-end roots points to a bright future.