The designers' toned down their typically tailored look, instead drawing inspiration from the rock music they listened to growing up in New York. 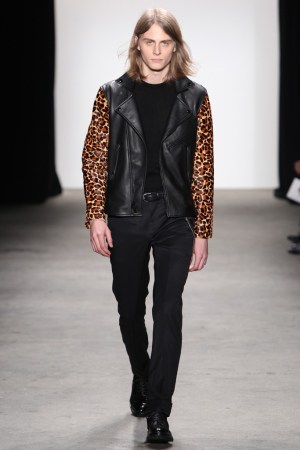 For their first runway show, Shimon and Ariel Ovadia toned down their typically tailored look, instead drawing inspiration from the rock music they listened to growing up in New York. “We’re not showing one tie,” said Ariel backstage before the show. “And everything is open.”

Some punk influences were apparent in the large leopard prints on pony hair, featured on the sleeves of a leather biker jacket, and buffalo plaid for shirts and jackets.

Athletic influences then came in the form of a vibrant silver coated-leather bomber and a nylon hooded anorak layered under a tailored topcoat.

As for the more dressed-up pieces, here they included textured turtlenecks and silk-and-cashmere crewnecks worn with blazers. Fur-trimmed hoods and lapels added a chic touch to the strong outerwear.

This rich and modern collection proved that the Ovadia brothers have moved beyond their traditional roots and are on their way to becoming a lifestyle brand.