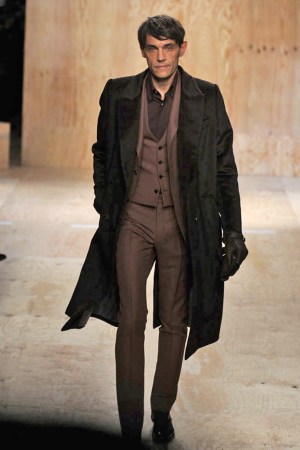 A minimalist installation of lasts at the entrance of Berluti’s fall presentation was a reminder of its roots — and how far the 19th-century cobbler has come in recent years. While this was its first runway show, and only its fifth ready-to-wear collection, you get the impression it’s been there forever, such is its level of sophistication and sturdy sense of fashion.

For fall, designer Alessandro Sartori applied his quintessentially Italian sense of chic to sporty Alpine blousons and gave the full-legged woolen skiing pants of yore a new life. Mottled knits and weekend bags in the house’s signature deep patina added to the outdoorsy theme, while models of various ages underscored that Berluti isn’t chasing the trendy crowd, but worldly men of means.

Dressier options included very slim three-piece suits from lightly patterned tweed, along with a number of double-breasted tuxes, the kind 007 would find appealing. A rich palette of chocolate, caramel and burgundy added to the opulent affair.

But it was the razor-sharp trenchcoats that stole the show. They were done from triple cashmere, a new technical fabric, the top and bottom layers of which are water-repellent. “The idea was to blend raw material with extreme luxury, so that in the end it would still look masculine,” explained Sartori. And so it was.