Aldo Maria Camillo was inspired by the idea of a timeworn military wardrobe for his fall collection. 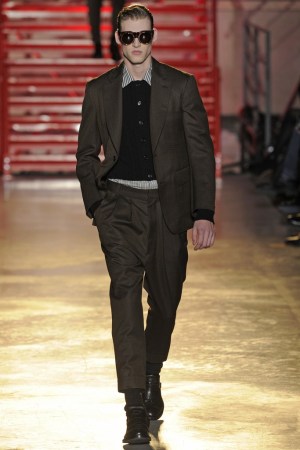 Aldo Maria Camillo was inspired by the idea of a timeworn military wardrobe for his fall collection, which featured layered garments in the muted dark shades of an old photograph.

The Italian designer played with proportions, pairing an elongated fitted jacket with cropped pants that were loose in the crotch. An oversize checked coat featured a large breast pocket that had been dropped almost to waist level, while a billowing black wool coat came with a hood that morphed into a shawl.

Though the show notes referred to his experiments as “calculated yet crucial mistakes,” Camillo’s concept of “imperfect perfection” proved elusive. While the layering idea worked well in the case of a brown coat topped with a long black sleeveless vest, the jackets worn over coats seemed forced.