Riccardo Tisci raised his game for fall with a muscular show rippling with new ideas. 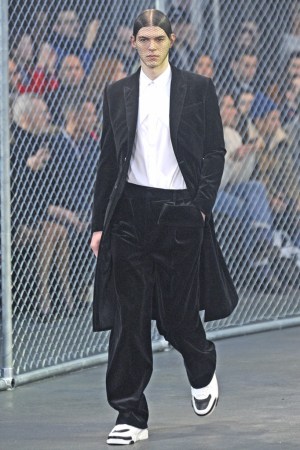 One of the instigators of the streetwear trend now sweeping men’s fashion, Riccardo Tisci raised his game for fall with a muscular show rippling with new ideas.

He laid out a basketball court set, caged in the round, and referenced the sport and the street with the shrewdness of a man who owns more than 300 pairs of sneakers and has Kanye West on speed dial.

A lean dress coat and full-legged trousers in black velvet opened the show, styled with a shirt and sneakers in pristine white, foreshadowing a collection that blended formal and sporty. Both were plied in the most luxurious ways imaginable: leather parkas; puffer jackets in velvet; athletic jerseys in angora.

Sweatshirts, a Tisci staple, were elevated further with abstract paint smudges, zippers snaking across the shoulders like the grooves on a basketball or hoods lined in muskrat.

Fur was a key ingredient, from small scarves to full-on coats that were worn in the same offhand way West did in the front row — with a hoody and leather trainers.