The British designer explored the hazier side of psychedelia with a color palette veering from faded tapestry shades to dusty lilac and old pink. 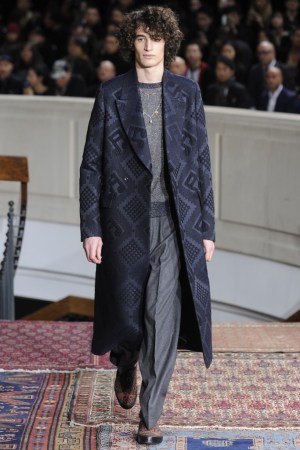 Paul Smith is having a Jim Morrison moment. Following his acid-bright spring collection, the British designer explored the hazier side of psychedelia with a color palette veering from faded tapestry shades to dusty lilac and old pink.

His soft parade included late-Sixties staples such as funnel-necked shirts, skinny black leather pants and oversize short-sleeve tunics that would not have looked amiss on Morrison himself. A brown shearling hoodie worn with dark tie-dyed pants brought that hippie aesthetic into the 21st century.

Smith paid a more literal homage to rock with a series of items emblazoned with music notes. They included a fuzzy dark blue sweater with a single burgundy note on the chest, or a broad-shouldered coat that featured a pattern of smaller red notes on a black background.

But the winners were the coats and jackets in intricate Moroccan-inspired woven motifs.