There were two chapters to the designer's whimsical fall fable. 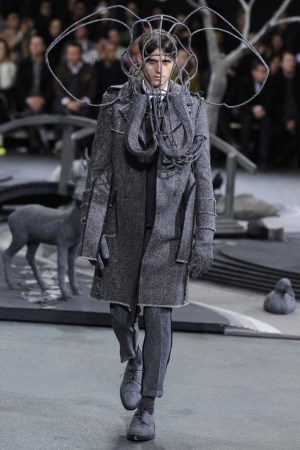 There were two chapters to Thom Browne’s whimsical fall fable. Part one featured a surrealist lineup of essentially British gents wandering around a Japanese-inspired garden. They all wore variations on tweed suits — sometimes ending in shorts or kilts — faces obscured by fantasy headgear, including rabbit ears and deer antlers.

The designer mixed gray herringbone, gray Donegal and gray Prince of Wales fabrics in playful ways, sometimes doing one leg in a tweed different from the other. Coats were outstanding, their hems stitched inside out.

In chapter two, the slender British gent turned into a sumo wrestler. Cue pumped-up samurai pants and giant bomber jackets, some with backpacks worked into the bulky construction. While magnificently executed, the moral for this part of the fashion story was: strictly for show.