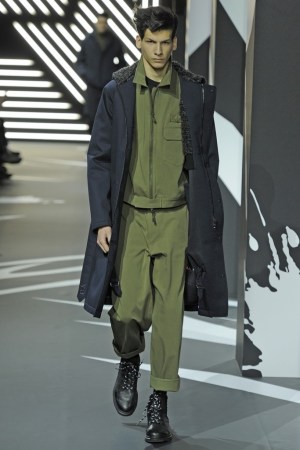 Y-3: Yohji Yamamoto begs to differ with Tina Turner: We do need another hero. Superheroes from Sixties comic books inspired the Japanese designer’s latest Y-3 collection for Adidas, decamping from New York and making its debut on the Paris runway. Backstage, Yamamoto also mentioned André Courrèges and Pierre Cardin, couturiers from the same period who championed a “very modern” look.

He etched both references lightly on the runway, sparking mostly dark and plain fabrics with neon taping and comic strip graphics. Parkas and bomber jackets came bedecked with utility pockets for men; elongated and glossy for women.

These were clearly superheroes in their off-duty guises, give or take one or two capes trimmed in those three telltale stripes.