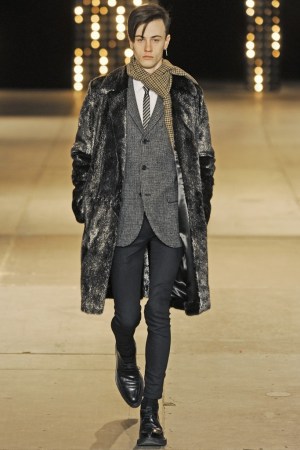 “The creator of the new composition in the arts is an outlaw until he is a classic,” Gertrude Stein wrote in 1926.

Hedi Slimane has been something of a fashion outlaw since returning to the revered house of Yves Saint Laurent, giving the label what some saw as shock treatment, tapping into the energy of the Los Angeles music scene and reviving grunge and Teddy Boy style.

He kept hammering those same nails on Sunday night, sending out another pack of beanpole rockers, sometimes drowning in their borrowed-from-pop woolen blazers and sparkly green dinner jackets, their chopstick legs wrapped in black denim or leather.

But there was plenty of news. The designer introduced a host of English fabrics, reclaimed that inimitable squared-off YSL shoulder line and introduced more — dare we say? — classic styles familiar since the Fifties, including raglan-sleeve woolen coats, terrific trenches and slender suits with tapered trousers.

Staged in a clear tent at the foot of the golden cupola at Invalides, the show was more approachable and cleaned-up, while still with youthful energy and retro cool.

Varsity and biker jackets, seen in Slimane’s first two men’s shows, were revved up with animal prints and studs. New proposals included a handsome khaki cape and full-on furs, one in a striking houndstooth pattern. They, too, could be classics in the making.