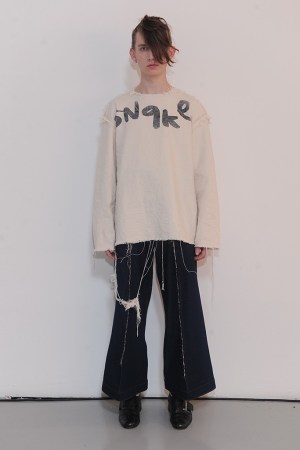 A magazine fanatic who lives in a kitsch Mayfair apartment and is obsessed with cavemen certainly isn’t your typical inspiration for a collection. “It’s all about taking primitive ideas and turning them on their head,” explained designer Alex Mullins.

The result was better than it sounds. Mullins played on proportions and riffed off workwear, with high-waist, cropped, flared pants and elongated monastic jackets in denim, corduroy, and velvet in a predominantly brown and navy color palette. Raw outside seams down the front of the pants were fashioned into sharp pleats, juxtaposing something crude against more traditional tailoring.

A giant, pink fluffy stuffed snake that insinuated itself around the set was an unnecessary gimmick.