The brand recreated a British biker café as the backdrop to its fall collection, a tribute to the Fifties and Sixties British bikers who inspired the lineup. 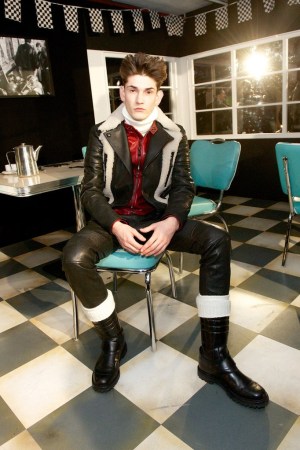 Belstaff faithfully recreated a British biker café as the backdrop to its fall collection, a tribute to the Fifties and Sixties British bikers — known as Ton-Up boys — who inspired the lineup. Models kicked back at Formica tables set on a checkerboard floor, wearing looks crafted from leather, shearling and wool.

One zippered black leather jacket had a rich shearling collar, while a luxurious flying jacket came in white, and was lined with brown shearling. Replicating a biker silhouette, Fred Dyhr, Belstaff’s vice president of men’s design, paired the jackets with leather motorcycle pants and heavy boots.

Dyhr punctuated all the leather with a few knit pieces, such as a brushed mohair sweater in a gray and black checkerboard pattern and rugged, cable knit crew necks. “It has a very British sensibility about it,” Dyhr noted.