The designer was in a Rio state of mind, with a buzzy collection that celebrated the fizz and steam of Rio di Janeiro at its most flamboyant. 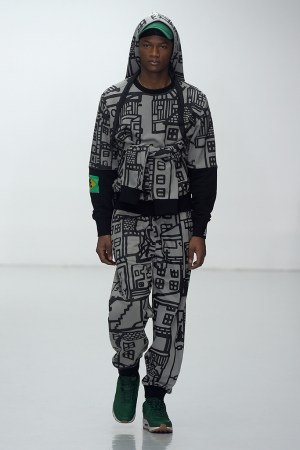 The designer was in a Rio state of mind, with a buzzy collection that flipped the idea of fall on its head, and celebrated the fizz and steam of Rio de Janeiro at its most flamboyant.

Models bounced down the runway dressed in big carnival feathers, the colors of the Brazilian flag and Disney prints from the 1942 film “Saludos Amigos.” (That’s the one where Donald Duck learns the Samba from a cigar-smoking parrot called José Carioca.)

Cue bright sweatshirts showcasing the faces of Donald, José and fluttering little birds — as well as more louche references to drugs — on tracksuit tops and bottoms. Loose trousers were covered in the graphic tiled wave pattern by Roberto Burle Marx, synonymous with Rio’s beachside. Said pattern also came in patchwork denim on a pair of jeans.

For the bold — or simply patriotic — there were bright blue trousers with white stars, mimicking the country’s flag, and lots of fuzzy fabrics in bright red or orange for boxing shorts and tracksuits.

“It was a selfish collection for me. I have a lot of history with Brazil, I like Disney, and I wanted to have some fun. It’s not the obvious fall collection with dark colors,” said Abley in the understatement of the season.