The Casely-Hayford father-son duo proposed a collection for urban rebels who'd like to escape their rat-race existences. 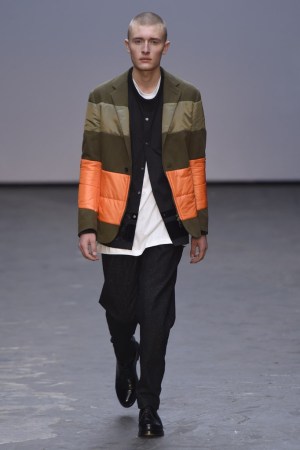 The Casely-Hayford father-son duo proposed a collection for urban rebels who’d like to escape their rat-race existences.

Layering was the big story here. Consider a long, black fleece vest over an ankle-length gray and claret hooded cardigan, which was worn over an even longer black fleece hoodie, over a sweatshirt and narrow tailored trousers. Not good for getting dressed in a hurry, but worth the effort for a striking look that was surprisingly wearable.

The tailoring was still there, just concealed: The hem of a gray blazer peeped out beneath a paneled sweatshirt, which was worn under a striped charcoal “crewdigan” – a long crew-neck sweater that split at the neck revealing the other layers. The finishing touch? A pair of orange tailored trousers.