The brand created a hybrid collection that fused the brand's technical roots with elements taken from men’s tailoring and the military. 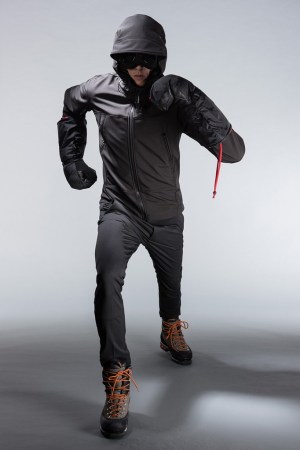 C.P. Company started life in 1975 making Goggle jackets — with driving glasses built into their hoods — evolving into a label known for its functional sportswear. Creative directors Paul Harvey and Alessandro Pungetti are intent on moving things forward, creating a collection fusing CP’s technical roots with elements from both men’s tailoring and the military.

“It’s an idea of mixing various points of reference,” explained Harvey, pointing to a parka jacket in which a tweed fabric was translated into a photographic jacquard. The jacket also featured an oversize military hood and a blue quilted lining. Similarly, nylon puffers were executed in a tweed print.

Elsewhere featherweight quilted jackets — some with built-in goggles — came in vibrant shades of red, blue and yellow with functional details including detachable linings and hideaway hoods. There were also more technical hybrid versions with sleeves and hoods made of neoprene.