“Mountaineering started coming into my mind obviously,” Ali said as he showed off outerwear and rugged boots, in collaboration with Tricker’s. 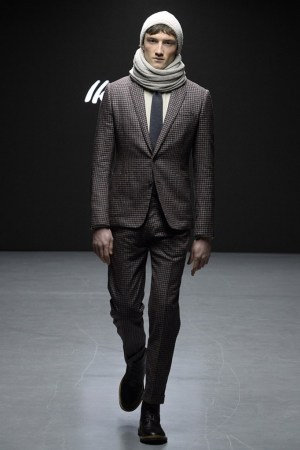 Seeing is believing: Just ask Hardy Amies creative director Mehmet Ali, who journeyed to Mount Snowdon, a film crew in tow, to see what all the fuss is about. The designer said he was probably as awed as J.M.W. Turner at the rugged textures and such unexpected colors as terracotta, clay blue and dark conifer greens, which inspired the nubby, speckled and textured wools he used for softly tailored suits, handsome overcoats and rugged expedition parkas, one with a degradé band evoking one of the British painter’s sunsets.

“Mountaineering started coming into my mind obviously,” Ali said backstage as he showed off the sturdy, compact weaves on outerwear and the rugged boots, in collaboration with Tricker’s.

The narrative played out in a subtle, yet chic way on the runway, a new format for the Savile Row brand.