Designer Marjan Pejoski sent out an uncompromising collection that conjured a sinister mood. 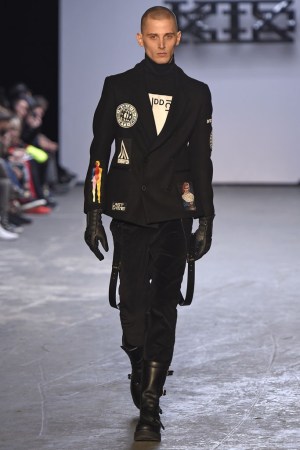 Designer Marjan Pejoski sent out an uncompromising collection that conjured a sinister mood, with designs that had an air of “A Clockwork Orange,” riot gear and military garb.

Recalling the Droogs of the Kubrick film, one model strode out in white zippered overalls and a white shirt, teamed with heavy black boots and a bowler hat, an umbrella tucked under his arm.

Pejowski also gave British heritage fabrics a militant twist, as one hound’s tooth bomber jacket was patched with beaded images of Lenin and Chairman Mao. As a contrast to those ultra-severe looks was a series of beautifully crafted pieces with a tribal air, such as a fur-trimmed black hooded parka, inset with images of animal skulls.