Mazhar said that he wanted to explore “the idea of a uniform.” 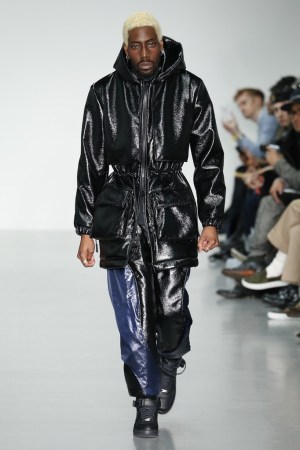 Nasir Mazhar said that he wanted to explore “the idea of a uniform.” He was referring, however, to a guy whose day runs from “hazy-eyed lazing” to “strobe-filled euphoria,” according to the show notes. Cue a line-up of the designer’s signature macho street-wear, this season rendered in opulent fabrics at odds with the sporty silhouettes. Among the designer’s more experimental looks were tracksuits done in jacquard, as in one attention-grabbing combo of zip-up jacket and matching track pants in a glittery charcoal and royal blue floral pattern – not a look for the faint of heart.