The collection was inspired by the world of espionage with an expanded eveningwear line of smoking jackets inspired by archival necktie prints. 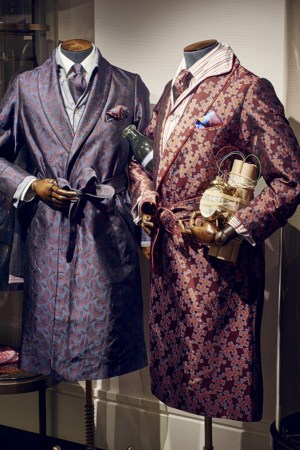 Turnbull & Asser’s collection looked to the world of espionage. “The brand has a great history working in cinema and costume,” said head of design, Dean Gomilsek-Cole, noting that John le Carré was a customer and that T&A created the ties for the remake of his “Tinker Tailor Soldier Spy.” An expanded eveningwear category featured silk smoking jackets fashioned in tie prints depicting dice and also chess pieces.

Cole himself was sporting a replica of a tweed all-in-one commissioned by Sir Winston Churchill and available made-to-measure to celebrate Churchill’s 50th anniversary.