Universal Works showed its collection as an art installation where 10 models standing in a circle passed top coats from one to the other. 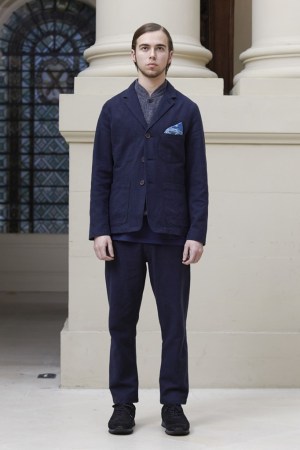 Perhaps as a foil to its simple, wearable garments, the Universal Works presentation was big on concept.

Picture a circle of 10 models in a Bloomsbury church passing between them a series of top coats – all navy, save one in orange – which they pulled on and off to the rhythm of a drum with semaphore-like arm movements.

“Passing things on is the whole idea of Universal Works,” explained designer David Keyte, whose label was born from a tie passed down from his father.

The collection also included suit, sports and bomber jackets paired with loose tapered pants of merino wool, jersey and washed cottons that were influenced by Eighties sportswear and came in in a palette of olive and navy. “I’m making real clothes for real people,” pronounced Keyte.