The designer's love and knowledge of fabric took center stage in his fall show. 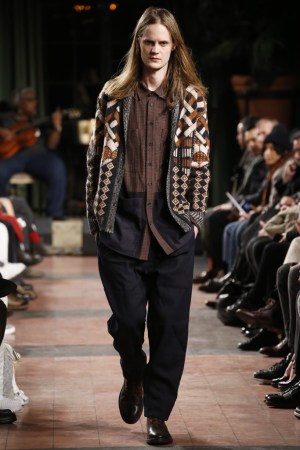 Billy Reid’s love and knowledge of fabric took center stage in his fall show, with the Alabama-based designer using traditional materials in innovative, non-traditional ways. For example, superwide-wale corduroy was used for both pants and jackets and cashmere was employed in a luxurious two-tone basket weave sweater. “It all starts with fabric development,” Reid said.

Pattern and texture also played a role. The designer used a bird print in several pieces, including a blown-out hawk eye on a sweater and an all-over print on an overcoat. Cashmere pleated pants were so soft they had “a liquid feel,” Reid said. He also showed wool and silk jacquard pants with a long leaf pine print, a cracked leather shearling jacket and a two-tone herringbone topcoat.

Although some of the looks were a little heavy, silhouettes were more relaxed this season, as evidenced by the roomy cotton canvas utility pants, full trenchcoat and braided wool cape. The same held true of the tailored pieces that Reid described as “a little more boxy — a bit of a David Byrne moment.”