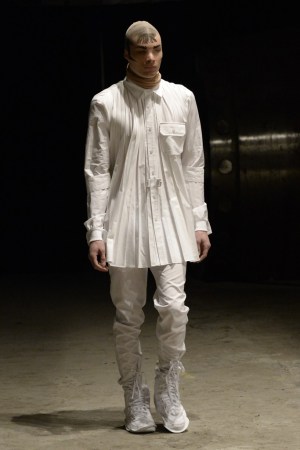 As one of the guinea pigs of the LVMH Prize, Shayne Oliver is proof that there’s a before and after. The effects of the 100,000 euros and a year of mentorship he won as a recipient of the inaugural special runner-up prize have been apparent in his last two shows, beginning with January’s outing at Pitti Uomo as well as Sunday’s fall show.

To the first-time viewer, the latter collection probably lived up to the reputation for deviant, gender-bending street culture extremes Oliver has quickly earned. The models wore pantyhose crudely scribbled with eyebrows, sideburns and facial hair over their faces, obscuring their sex. The men wearing high-heeled, square-toe platform clodhoppers and dresses slit to the crotch had a feminine strut to their step. But androgyny is a major trend, particularly in the men’s fashion world, and pack mentality doesn’t seem to suit Oliver. His boy/girl blur was toned down and the execution, quality and maturity of the collection was scaled up. It was an indication of where the future may lie for an outlier like Oliver. There were real, wearable sartorial moments in men’s, including a sleek black leather-belted utility parka with a fur-trimmed hood paired with dyed fly-away jeans. For women, a gauzy, striped apron-halter knit branded with the stark HBA logo worn with extremely wide, club kid pleated pants with utility straps was edgy but also relatively cute.

The show closed with an enormous, extravagant fur coat wrapped with a logo knit band that constricted the arms. It was luxury but still quite street. Perhaps Oliver can have the best of both worlds.