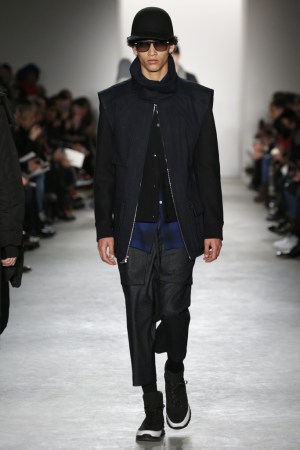 By their own admission Dao-Yi Chow and Maxwell Osborne have spent the past few seasons — two, plus two pre-collections for women — cementing their aesthetic code. That meant deliberate repetition, maybe playing it a little safe. Now that their point’s across, they’re free to be more expressive. Chow said the fall collection is “personal,” inspired by his and Osborne’s time in the early Nineties New York club scene as it transitioned from house to hip-hop, which translated to a richness and heightened energy that’s been stilted in seasons past.

The models — more women than men — were a tribe of impossibly cool city kids, who appropriated their long, oversize layers from different subcultures. Their uniform was a stylish compilation of casual, comfort items and rugged performance gear. Robust outerwear — trapeze puffer anoraks and big, boxy shearlings  — shaped the oversize silhouettes, giving volume and heft to the long, gauzy caftan and maxiskirt underlayers for women and the gray melange wool parka with black overlay and matching pullover paired with oversize dark denim for men. It wasn’t unisex, but much of the pieces were virtually interchangeable.

There was more color and pattern than ever, with grungy plaids and a crafty Deco-patterned jacquard used on an anorak and poncho, which gave the lineup a cool, improvisational attitude. But everything was considered. The Public School urban nomads are a polished bunch.