Phillip Lim served his fall collection on the rocks — literally, as models paraded under giant stones strung from the ceiling. 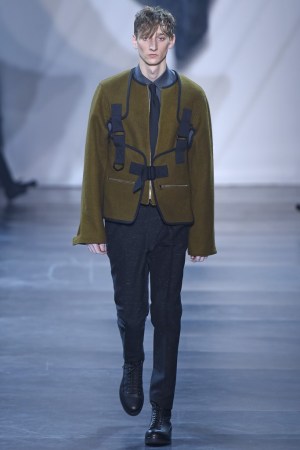 Phillip Lim served his fall collection on the rocks — literally, as models paraded under giant stones strung from the ceiling. Mountaineering was the theme, though Lim made sure to give his climbing-gear an urban edge.

This physically demanding sport served as a metaphor for multi-functional garments with a certain ease, and Lim delivered on that promise. Silhouettes were slightly oversized, especially around the sleeves, while a clever mix of fabrics accentuated their versatile nature.

Lim impressed with outerwear options that at times harked back to traditional Alpine dressing, including a long and lean coat in olive green, featuring a stand-up collar and a carabiner in lieu of a belt. Handsome layering included a cardigan worn on top of a sporty nylon windbreaker with knitted sleeves, as well as the series of loosely tailored pants with built-in legwarmers. The collection got too gimmicky at times, as in knotted tank tops resembling safety nets worn on bare skin.