Sébastien Meunier did not stray far from house codes with his second men’s outing since being officially named creative director of Ann Demeulemeester. 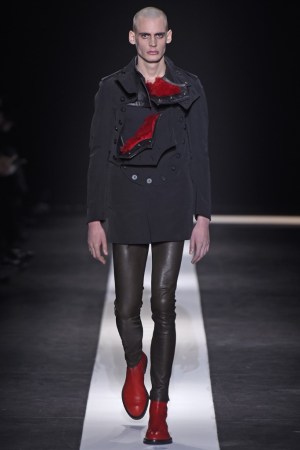 Sébastien Meunier did not stray far from house codes with his second men’s outing since being officially named creative director of Ann Demeulemeester. He played with puzzle constructions, sending out military-flavored coats and jackets with detachable collars and panels that were secured with buttons and zips.

The loose parts were used to add a dash of color, or bring a sense of depth. Curly red wool lining flashed from a black leather cutaway vest, while a double-layered blue coat featured a U-shaped button-front panel that was left half-undone.

The self-effacing designer seems hesitant to step out of his mentor’s shadow. While respecting the brand DNA is commendable, this felt at times like a rendition of Demeulemeester’s greatest hits.