The collection featured hints of military dress in the strong-shouldered blazers and overcoats, detailed with brass buttons and regimental braiding. 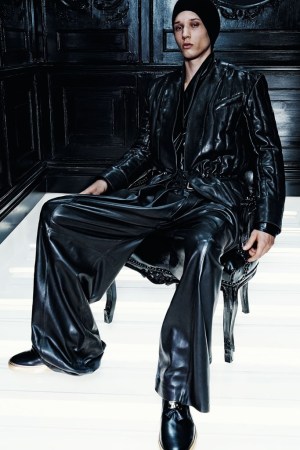 “It’s my royal army,” Olivier Rousteing declared as models in black cashmere stocking caps marched into the gilded salons of the Hôtel d’Évreux, an 18th-century mansion next to the Ritz.

Indeed, there were hints of military dress in the strong-shouldered blazers and overcoats, detailed with brass buttons and regimental braiding. Balmain’s creative director had eased up on motocross and other sporty references to pursue something “more classic and elegant — the new aristocracy,” he declared.

Everything took on dressy airs, as a tuxedo morphed into a green velvet jumpsuit, and black pea coats and smoking jackets came tightly belted or sprouted fox-fur collars. Slouchy pants in glove leather or silk lapped over leather slip-on sneakers, the outsole gilded like the salon setting.

Sparkly cardigans heaving with angular crystals were strictly for editorial and the celebrity set, but expected from a designer who is besties with Kimye — who feature in Balmain’s spring 2015 campaign.