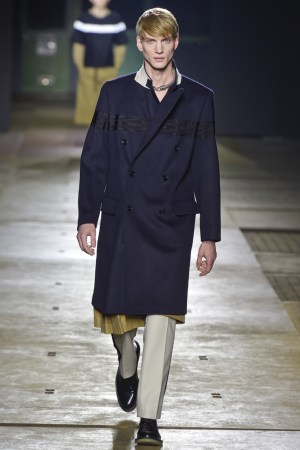 With just the right doses of Eastern exotica, Dries Van Noten coaxed wonderment at his men’s show Thursday evening. The plaintive soundtrack of “Be My Baby;” the intricate ethnic prints, and the hammered silver decorations embedded in outerwear contributed to a transporting show with an emotional tug.

Outerwear has been the star item of the European men’s season so far, and Van Noten hit the bull’s eye from his opening look: A handsome navy overcoat with a band of black grosgrain hugging the chest and sleeves. This foreshadowed several suave takes on the fireman jacket – luxurious with glossy black fur collars; rugged in olive drab, and arresting and completely unexpected in burgundy batik.

There were yet more hit coats: Trenches in Japanese indigo or silk; a woolen bomber sparked by a single work-wear stripe, and the stunning finale topcoats dripping in silver ornaments with motifs from China’s Miao people. (The motif foreshadowed the Costume Institute’s next exhibit in May, which will focus on the impact of China on the West, including fashion.)

Plainer coats were worn inside out to exalt quilted linings in tricolor satin. The quilting re-appeared as a bed jacket with an obi-like belt accentuating the waist. It seemed Van Noten could do no wrong this season. Sure, there were styling gimmicks, including kilt-like aprons and baggy shorts layered over skinner pants. But nothing could break the spell cast by this accomplished collection.