“Back to the roots,” Tisci said backstage, explaining that he returned to some of the original impulses that feed his fashions. 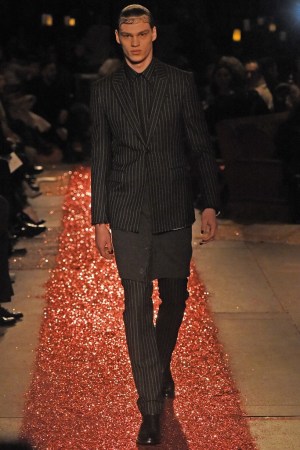 Fashion groupthink, magnified by the rumor mill, had Riccardo Tisci uprooting from Paris, switching luxury camps and taking over Gucci. Not only has that scenario turned out to be complete hogwash, Tisci broadcast his creative ownership of Givenchy with a powerful men’s show.

Tisci has been glancing back at his Givenchy career on his Instagram feed lately, perhaps because he’s marking a decade at the house. “Back to the roots,” he said backstage, explaining that he returned to some of the original impulses that feed his fashions, including his collection of religious artifacts, and his penchant for the mystical and the macabre. They’ve reshaped Givenchy, which he has reshaped in his image.

Many of the signposts of the Tisci era were in the fall collection: the taut, muscular tailoring, this time in allover pinstripes; the streetwise sweatshirts, now bearing watery skull decorations, and the bold prints, magnified Moroccan carpet motifs splashed head to toe.

That it didn’t all jibe seamlessly didn’t seem to matter. What registered was a rush of ideas, and the knack Tisci has for exciting fashion shows laced with danger and urgency.

In a transparent tent lorded over by the gilded cupola at Invalides, he laid out a jagged pathway of red glitter that practically trembled as the Martinez Brothers unleashed their rumbling beats. The models whisked by in a blur of raccoon tails, fright makeup, tattooed Popeye forearms — and completely salable merch, including one killer camel coat flashing a red interior.

The show skewed dressy and tailored, as seen on many other Paris runways, with streetwise fare — hoodies and rugby shirts, ragged edges and gunshot with holes — something of an afterthought.

Tisci was an instigator of the coed show, and he ended this one by splashing the carpet motifs in sequins on a suite of gauzy evening gowns for her; on strong-shouldered coats and jackets for him, the shoulders cloaked in black sequins like hot tar.

“It was very, very me,” Tisci said, declaring, “Back to square one.”