Three years at one of Paris’s pillars of luxury and fashion grandeur have not dulled Raf Simon’s appreciation for the raw and rebellious. 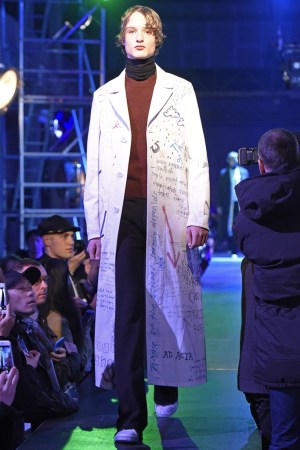 Three years at one of Paris’s pillars of luxury and fashion grandeur have not dulled Raf Simon’s appreciation for the raw and rebellious.

Dior’s couturier ditched the seating chart and compelled the fashion crowd to trek out to a remote suburb and gather to stand (yes, stand — for a 45 minute wait) around a raised runway in a chilly warehouse to view his signature men’s collection. The perspective accentuated the elongated, gently flaring silhouettes — hinged on meaty or papery outerwear and droopy knit pants that dragged under white leather sneakers.

Angry scribbles and doomsday doodles on white lab coats announced the dystopian, “Blade Runner” mood of the show, which included a handful of female models in men’s looks, fast becoming a runway norm in Europe.

Many were sleeveless and with the scooped fronts of pinafores — more of a demonstrative vest than something that keeps you warm. Long and narrow sleeveless trench coats trailed like a super villain’s cape.

More straightforward coats, generously sized, came in thrift-shop checkered wools and upholstery-like tweeds.
With this show, Simons reclaimed fashion turf he mapped out early in his career, elevating teenage angst to the height of cool.