Before his fall show, Rick Owens hinted that it was going to be “primal” — but didn’t say that images of certain exits are certifiably NSFW. 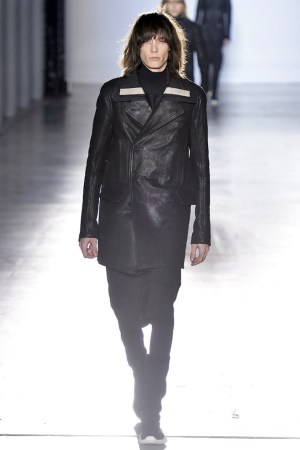 Before his fall show, Rick Owens hinted that it was going to be “primal” — but didn’t say that images of certain exits are certifiably NSFW.

The designer also offered two clues as to his inspiration: the sphinx and a black-and-white submarine movie. “When I see a sphinx,” he elaborated, “I’m thinking of this moment of suspense – sphinx, they are glamorous, exotic, and mysterious, but I also think of a vessel… It’s about men being together in closed quarters having to maintain a sense of decorum under intense pressure, and when that happens, their best comes out and their worst comes out, a sense of order and a sense of honor can be enhanced, but then everything can fall apart and become primal.”

Translation: He literally let it all hang out. Heavily deconstructed tunics — cut into pieces and put back together again – lay bare those parts that needed most protection: the models’ male members.

Owens also covered the body beautifully, in cable-knit sweaters that grew into full-body suits, while hand-woven Berber blankets, which were custom-made for the collection, were transformed into handsome pea coats. There was also heavy padding, first on mixed-media tunics, then into outerwear pieces that blended hooded sweatshirts with parkas with capes in the back.

That walk “on the razor’s edge,” as Owens put it, “and how we handle it, that’s what it’s about. It always needs to be more than I intended. I’m still not exactly sure what it is. That sounds lofty and I don’t mean it to be, but there needs to be a certain ambiguity and mystery for it to be — for the lack of a better word — magic, and I’m working for that magic,” he said.