The collection celebrated artistry in all its forms. 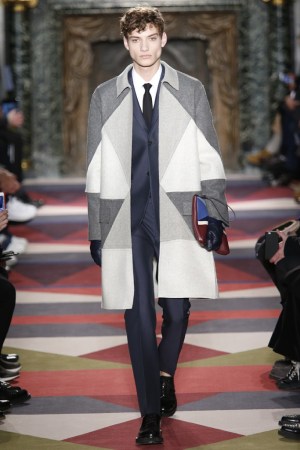 Valentino’s Maria Grazia Chiuri and Pierpaolo Piccioli see the label as a modern-day factory — but more Ballets Russes than Andy Warhol. The spirit of the early 20th century dance company, which collaborated with the likes of Pablo Picasso and Coco Chanel, inspired a collection that celebrated artistry in all its forms.

Following their recent partnership with Barnaba Fornasetti on a line of objects, the creative directors joined forces with Australian painter Esther Stewart, whose geometric compositions inspired graphic patterns on everything from slim-fit parkas to intarsia sweaters — not to mention the lush carpet in the show venue.

“We try to be like a modern artist’s factory,” Chiuri explained backstage. “We test ourselves and our creativity with new elements. At the same time, we don’t want to forget our heritage in haute couture.”

Rendered in geometric panels on a gray coat, or in muted colors on a sleek leather blouson, the motifs were layered in a kind of visual call and response. To wit: A textured wool coat with irregular horizontal stripes that split open to show a glimpse of a contrasting patterned sweater.

Elsewhere, oversize patch pockets were used as color blocks on sweaters and outerwear, including a standout zip-up coat with caramel leather pockets.

An abundance of print motifs — from butterflies to the celestial skies — were thrown into the mix as well and, at times, seemed random. But if the color-block route shouted individualism, the suits in traditional British heritage fabrics merely whispered it: one of these, in a gray microcheck, featured a printed flower overlapping the lapel and — though you couldn’t see it on the catwalk — a camouflage patterned lining.

Piccioli said the look reflected the changing nature of men. “New men are faceted. You can be fragile and strong at the same time,” he said. “This collection is about freedom to be whoever you want to be. That’s important to us.”