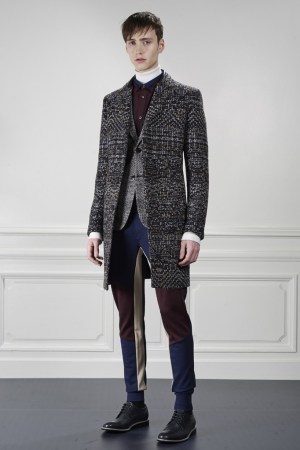 Viktor Horsting and Rolf Snoeren took to graphic design for fall. The duo presented a series of sweaters, coats and suits featuring pixelated patterns, some of which were done in custom tweed. With thick wool and cashmere as the main fabrics of choice, the collection focused on looks that were rather fitted, but sober, letting the textures do the talking. The graphic handwriting transitioned into skiwear-inspired outerwear numbers such as a quilted down blouson, flashing a blown-up version of the pixels in brown, burgundy and navy. Throughout, the lineup merged athletic elements with classic tailoring, which was particularly appealing in a reversible cropped pea coat – felt on one side, nylon on the other. The duo’s evening options were more of a challenge: Cue a satiny, mushroom-colored tuxedo for the red carpet, among other hiccups.