With their chopped-up clothes and scarred faces, some of the models in the Yohji Yamamoto show brought to mind Frankenstein's monster. 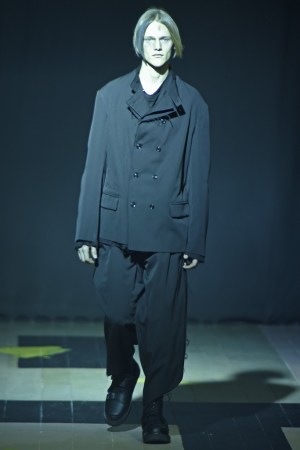 With their chopped-up clothes and scarred faces, some of the models in the Yohji Yamamoto show brought to mind Frankenstein’s monster. “After surgery,” the impish designer said backstage.

Wielding his scissors like a scalpel, Yamamoto revisited several of his cherished themes – layers, patchwork and deconstruction – with outfits that frequently looked like a work-in-progress. Plain dark jackets with unfinished edges were made from paper-thin layers of fabric that peeled open like a book.

Jackets were spliced together from contrasting materials. A rustic gray wool was juxtaposed with black gabardine, while another black jacket was buttressed with panels of distressed leather. Mismatched sweaters were hacked down the middle and stitched together.

“From the beginning of my career, I’ve looked at nomadic peoples’ way of wearing layers. In the old times, we called them gypsies. They were wearing all their property. I like this sense,” Yamamoto said.

The designer took his bow decked out like a traveling salesman in a dozen pendant necklaces. “We are going to start selling my new jewelry line. All silver. Brand new – that’s why I walked out as an advertisement,” he explained.