“It’s classics of a man’s wardrobe, really,” Burton shrugged, describing the “neat, sharp shoulders” of her military and Victorian-inspired silhouettes. 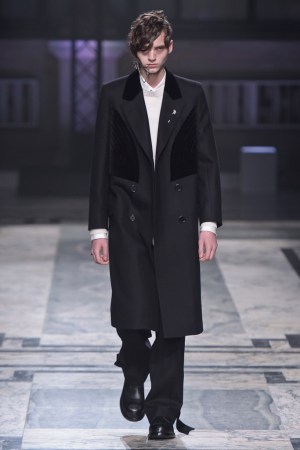 Instagram popularity offers a security blanket for many major designers today. For Alexander McQueen’s Sarah Burton, it’s scissors, pins and the other tools of a serious couturier and tailor. Heavily pregnant and painfully shy, she clutched a ball-headed pin during backstage interviews, occasionally stowing it in the navy sweater stretched taut across her belly.

Trompe-l’œil safety pins pierced the hollow cheeks of her pale young models, giving them the macabre mien of vampires as they paraded in some of the most elegant and refined tailoring seen so far in the English capital.

“It’s classics of a man’s wardrobe, really,” Burton shrugged, describing the “neat, sharp shoulders” of her military and Victorian-inspired silhouettes.

Long coats, popular over an uneven London weekend, were theatrical and a touch costume-y here, scattered with embroidered butterflies and moths, a key motif of the collection that also alighted on camel sweaters, the lapels of officer coats and in rows on skinny suits, engineered into an oddly eerie jacquard. Antique gold sequins in paisley patters spilled from the shoulders on the finale topcoat, but disappeared past the hips, as if moth-eaten.