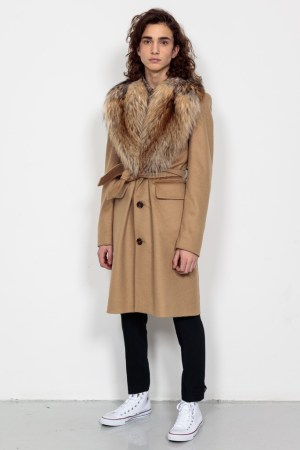 Wouter Baartmans and Amber Siegel’s polished collection was influenced by Seventies underground clubs of Spanish Harlem, reflecting in details and shapes the eccentric style of the characters that would frequent illegal cockfights and such.

Standout looks included a reversible bomber that had leopard-print rabbit fur on the inside and black Neoprene on the outside — and two amorous cockerels rendered in beautifully intricate embroidery. Another great bomber came in a giant houndstooth jacquard with embroidered snakes slithering on its back.

A luxurious camel wool parka had a shearling lining and a drawstring waist, while another pimp-tastic camel coat had a big, fluffy fur collar.

They also showed a selection of cool women’s wear alongside the men’s, including a seriously plush gray fur coat was very Sharon Stone in “Casino.”