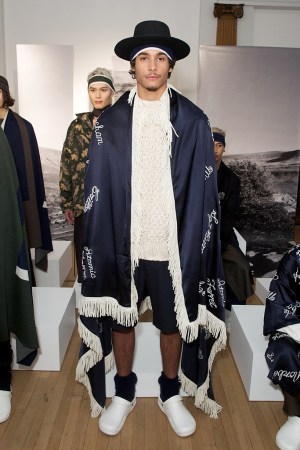 For Edward Crutchley’s first stand-alone presentation hosted by Louis Vuitton creative director Kim Jones, the designer paid homage to his native Yorkshire roots. “It’s really about the dales, the valleys, the hills, the moors, the rocks,” he said. “But not in a literal ‘This is the countryside’ way — more trying to capture the spirit or a feeling of landscape and the mood that that landscape creates.”

His use of traditional textiles yielded luxurious yet relaxed separates in a palette of oak brown, hawthorn red, lichen white, chlorophyll green and navy. Prints included a camouflage print composed with an English Oak leaf pattern.

A textile design consultant, Crutchley has worked with Pringle of Scotland, Kanye West and currently collaborates with Jones at Vuitton.

The former Central Saint Martins grad debuted his own line as a part of Fashion East in 2015 and last season screened a film as part of a British Fashion Council initiative.