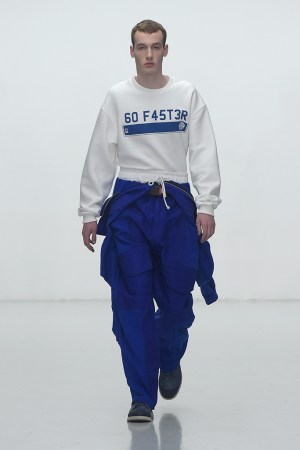 For his first solo catwalk show, Topman NewGen alum Liam Hodges showed a collection centered on British petrol-head culture, inspired by the laddish, loutish boys who spend all their extra cash and time souping-up Japanese hatchbacks. The theme was fun, but treated without any subtlety.

The opening look kind of said it all: A white sweater with 60 F45T3R (Go Faster) emblazoned on the front in blue, teamed with a blue boilersuit worn so that the top half hung open behind the model.

The palette consisted of colors most likely to be found in a garage: royal blue, red, black, white and yellow. Graphics featured strongly, with number plates and road markings playing a big role in Hodges’ prints.

Tracksuits, too, played a starring role. They were roomy and matching, and often featured Union Jack prints on the legs and a jacquard print of dirty wrenches on the back of tops.