Jeremy Scott lit up the Moschino catwalk with a fluorescent-drenched collection of combatwear and punky clothing based on the artworks of Gilbert & George. 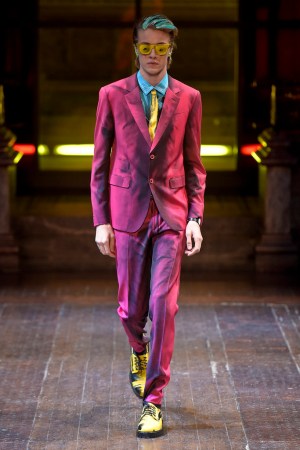 Jeremy Scott lit up the Moschino catwalk with a fluorescent-drenched collection of combatwear and punky clothing based on the artworks of Gilbert & George. Models — the designer showed men’s wear and women’s pre-fall together — walked the runway looking like they’d stepped right out of one of the artists’ surreal, cartoonish images, complete with dabs of glowing makeup on their ears, hair and faces.

Scott said he took tea with Gilbert Proesch and George Passmore, and told them about his idea to base the collections around their work. “They told me — ‘Go, take it and have fun with it,'” he said, adding that every inch of the searing garments — down to the yellow combat boots — had a specific pattern printed onto them.

Scott wanted the collection to be “oversaturated with color,” much like the duo’s artwork, and that’s just what he delivered: Bright pink, electric green or blue jackets and trousers shaded with black or covered with white scribbles to resemble wrinkles; a trompe l’oeil quilting pattern on bright denim pieces, and one resembling black checks on a red scarf.

Unlike the duo’s artworks, these clothes were totally off the wall.