Tourne de Transmission fused the idea of a global wanderer on a spiritual stop in Tibet with a tribute to the late Barry Kamen. 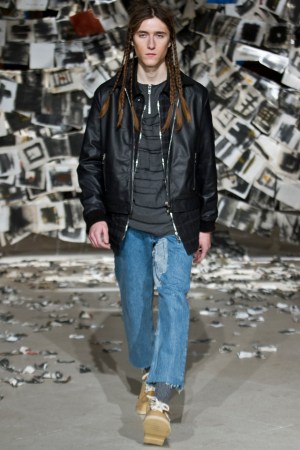 Tourne de Transmission fused the idea of a global wanderer on a spiritual stop in Tibet with a tribute to the late Barry Kamen, founder of the Eighties Buffalo movement. Creative director Graeme Gaughan showed off looks including a knitted ikat kimono; a plaid duffle layered over a duster coat in washed denim; and cargo pants, made from the lower half of a vintage flight suit and a reverse shearling jacket.

His strongest look was a distressed black overcoat with over-dyed denim patchwork detailing and an uneven hem. He embellished the look with a badge crafted from buttons and earbuds by designer Judy Blame. Looks were shown against backdrop created by art director Johnny Buttons that featured more than 300 hand-painted prayer flags.