The designer offered sartorial classics inspired by the American West. 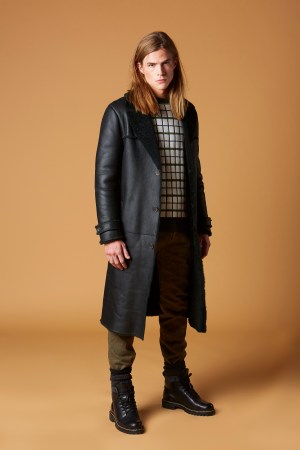 Brett Johnson has been designing men’s wear since 2013, but this season marked his first fashion week presentation — a milestone for the brand.

Johnson offered a lineup of “off-duty sartorial” looks that, while classic, hit some of the season’s trends.

“I was inspired by the leisure lifestyle of influential men and the historical references to the American West found in their off-duty, sartorial choices,” Johnson said.

A subtle Western influence was evident in the use of fringe on cropped leather jackets and cowboy shirts as well as a coyote-lined parka that looked like something Leonardo DiCaprio could have worn in “Revenant.”

While there were pieces that could have passed for traditional suits — albeit in mustard or bright red — the line was skewed more toward sportswear. Everything was handmade in Florence, which showed in the construction of the blazers and trousers. The silhouette was modern and fitted, but not tight; the trousers had nipped waists and the topcoats were slightly oversize.

While the collection lacked consistency at times, the overall effort proved that Johnson is a talent on the rise.