David Carlson put forth a focused effort influenced by the movie "Swingers," and the neo-swing movement from the Nineties. 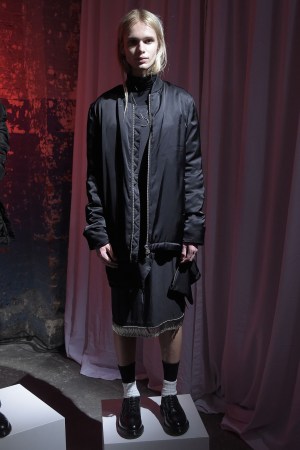 “I wanted to take the next direction because I feel like a lot of men’s wear is getting stale,” said Devin Carlson, the designer behind Chapter. Carlson didn’t fully define “stale,” but from the look of his fall collection and his previous lineups, the designer has severed ties with ath-leisure.

Instead, he’s pushing an aesthetic influenced by the movie “Swingers,” and the neo-swing movement from the Nineties that includes high waist, drop-crotch trousers, boxy denim pants and turtlenecks. Outerwear, which consisted of leather moto jackets, elongated satin bombers and tailored coats, topped off each look. It was a focused effort and a step forward for the California-based designer.