Designer Rio Uribe has blended a variety of cultures and influences for his fall collection. 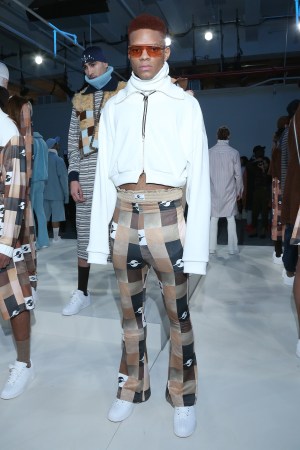 Gosha Rubchinskiy’s design influence has been felt in both street style during the recent men’s European fashion weeks as well as in some shows. And there were similar references in the fall collection of Gypsy Sport.

The Eastern European and Seventies ath-leisure influences worked best on a baby blue track suit with flared pants, and a patchwork shearling coat worn over a cropped track pant. But Gypsy Sport designer Rio Uribe’s story did not stop there. Western influences also appeared in bolo ties, a multistriped corduroy jean jacket and an elongated cowboy shirt. In a different universe, the multicultural references would collide, however Uribe’s ability to unify cultures seamlessly is what sets him apart.

When asked to define his place in fashion, he said, “I create global alternative sportswear.” We couldn’t agree more.