In a marked departure from the layered, streetwear-inspired aesthetic that was so prevalent at New York Fashion Week: Men's, Hickey Freeman showcased a collection of updated — and superluxurious — tailored clothing. 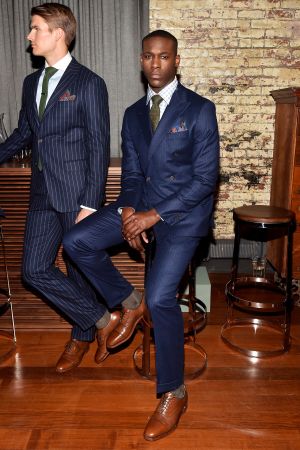 In a marked departure from the layered, streetwear-inspired aesthetic that was so prevalent at New York Fashion Week: Men’s, Hickey Freeman showcased a collection of updated — and superluxurious — tailored clothing.

Chief creative officer Arnold Brant Silverstone took over a townhouse in SoHo to create the world of Hickey Freeman.

The collection was broken down into three sections, all with distinct, yet complementary sensibilities. Highlands was Silverstone’s take on the Scottish countryside, but interpreted in a New York way. There were suits in exploded plaids and houndstooth, tuxedos in forest green, and dinner jackets in paisley jacquard. “It’s an English look but for today’s customer,” Silverstone said, pointing to the fuller pleated pants in the suits.

The Strand was the brand’s Wall Street-skewed grouping, with reinvented business suits in a range of new blues, accessorized with the same forest green. “We’re opening a new store at Brookfield Place in lower Manhattan in a few weeks,” Silverstone revealed.

The final section, Greenwich was “where the sky’s the limit,” he said. The grouping included a cashmere overcoat with a vicuna collar; a Yangir cashmere topcoat with cashmere joggers; a cotton-cashmere corduroy suit, and “a jogging suit in cashmere, if you want to jog in cashmere,” he said with a chuckle.

All in all, Silverstone delivered an elegant and elevated take on a venerable American brand.