Jacquard wool and rayon fabrics were found throughout the collection, and some jackets had raw edges that were purposely left that way. 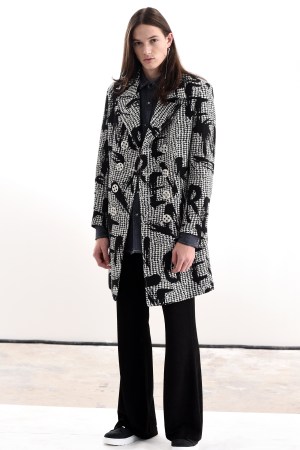 Departing from his colorful and outrageous prints of last season, designer Kenneth Ning focused on a dark palette this time around.

Titled “Revenge,” Ning’s line offered graphic capes, long mac coats with black and metal grommets, and burgundy bomber jackets, perhaps as a revolt against the traditional men’s wear tailoring. Jacquard wool and rayon fabrics were found throughout and some jackets had raw edges which, according to Ning, were purposely left that way.

“My biggest clients are from Japan and they love to take risks,” said Ning, who has previously designed for Calvin Klein and Michael Kors.

While the collection is wearable for the eccentric, several pieces — such as the jackets with metal grommets and oversize zippers — looked too conceptual and unfinished.