IsSixWeeksAfterFashionWeek = false
By Aria Hughes and Jessica Iredale on February 4, 2016 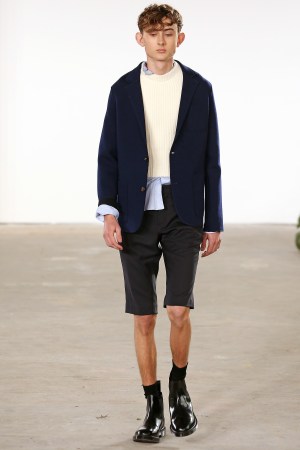 Orley is no longer just a sweater brand. The team, which is made up of brothers Alex and Matthew Orley and Matthew’s wife Samantha, still consider knitwear the foundation of their line, but for their fall collection, they layered on new elements that gave the line some breadth, just in time for their first seated runway show.

There are the tailored, pleated and printed knits, which added a dose of adult to the brand’s youthful aesthetic. Alex said their guy (and girl) is stronger this season, but they haven’t veered too far from their androgynous roots, which were on full display at their previous spring presentation. Backstage before the show, Alex said one of Orley’s tenets is to combat machismo.

The men wore shrunken sweaters with subtle peplums and knit polos covered in a floral print. These looks were offset with punky Chelsea boots. Other grunge undertones came through in a deconstructed, hand-knit sweater.

One of the most impressive pieces was a navy mohair jacket that appeared as if it were shearling.

Orley’s nascent women’s lineup was also shown. Alex said the category is growing rapidly — it’s sold at Barneys New York and Ikram in Chicago and its sales are comparable to men’s wear.

Women’s-wise, the show started relatively cautiously with what could be best described as boyish looks for girls as a counterpart to the girlish stuff for guys. But there was zesty development that will delight novelty knitwear enthusiasts and anyone who just likes pretty sweater dressing in shades of berry, pink and blue. Fuzzy mohair jackets looked remarkably like luxe shearlings. A pair of wallpaper-ish printed dresses layered over contrast pleated skirts — all knits — made for strong but not overwhelming optical interest. A pink ribbed cashmere vest over a matching, slinky skirt was a cozy crowd-pleaser.

The Orley family has already proved adept at manipulating knits and bringing some excitement to the category, but this season they showed their ability to produce a grown-up, retail-friendly wardrobe that speaks to their original sensibilities.