A return to denim on the runway, English plaids and skater/biker gear blended in Rag & Bone's fall men's collection.

IsSixWeeksAfterFashionWeek = false
By Jessica Iredale and Alex Badia on February 16, 2016 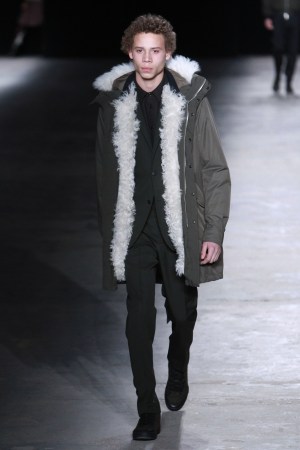 The Rag & Bone fall men’s collection was shown at the same time as the women’s during New York Fashion Week in a setup that was essentially two simultaneous, separate runway shows, as the women filed down one side of the runway and the men on the other. They weren’t mirror images, but close enough.

The men’s focus was denim, military references, Harris tweeds — “bonded things,” as Wainwright said — and tailoring. The new denim was a highlight, specifically, a carrot-shaped jean and a trucker jacket in a rigid selvedge denim.

Wainwright and Neville branched into new territory with the label’s first true suit, a slim-fit model in Loro Piana fabrics — burgundy or green — with handpick stitching. In addition to moto-inspired T-shirts and pants with articulated knees, they dabbled in performancewear for the first time with a technical jacket that has all the bells and whistles. “I personally wanted that one,” Wainwright said.