For fall, cofounder Joshua Willis said the mantra "she's only with you when she's with you" was on their brains. 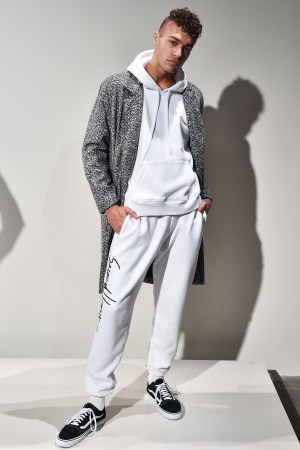 After looking at Second/Layer’s lineup, it’s not hard to figure out that the team behind the label grew up in L.A. Cholo, skater and streetwear references are a signature for the brand, which was founded by Joshua Willis and Anthony Franco in 2013.

For fall, Willis said the mantra “she’s only with you when she’s with you” was on their brains and he looked to outfits worn by neighborhood playboys — or “pobrecitos” as he called them — when he was a kid.

That influence resulted in a collection of basics — flannel shirts, bomber jackets, oversize hoodies and pants reminiscent of Dickies — along with softly tailored pieces including long overcoats and baggy trousers. The Second/Layer logo was more apparent than previous seasons and placed on henleys, sweatshirts and hoodies.

The offering sounds like the typical street- or skater-imbued lineup, but what’s distinctive about Second/Layer is its spot-on proportions and fabric choices. This is a collection that’s cool enough to attract the younger skateboarding customer, and elevated enough to appeal to an older guy who has no interest in abandoning the styles he grew up with.