A painterly workwear was Steven Alan's guiding principle for fall. 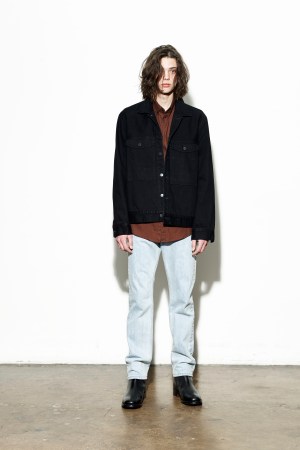 Steven Alan was feeling artistically utilitarian for fall, after seeing works by American painters such as Jackson Pollack, Helen Frankenthaler and Joan Mitchell at the Whitney Museum. “On the men’s side, the way they dressed was workwear, but they weren’t building things, they were painting,” Alan said. “It was a mixture of dress shirts, overcoats and work pants.”

Alan’s aesthetic of neat basics for the creative class is well established. The seasonal variation is, for the most part, slight and in the details. For both sexes, the workwear influence was nicely played on short, boxy jackets. A longer women’s denim jacket had a clean, utility vibe yet wasn’t too asexual.

Classic shirting was softer with a few slightly draped, painterly silhouettes. On the sturdier side, there was fuzzy Sherpa jacket and a nifty riff on a classic Patagonia fleece for the gal who likes an outdoorsy look but is unlikely to scale any mountain range.