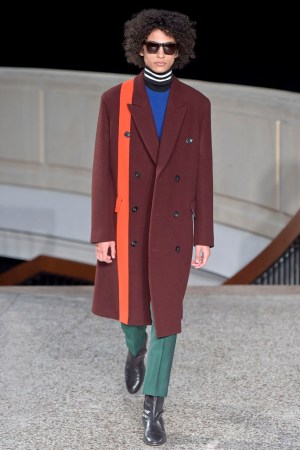 Paul Smith, who celebrated his late friend David Bowie with a party and memorabilia sale at one of his Paris stores earlier in the week, kept the tributes going with some choice Bowie tracks at his fall show on Sunday.

They were blended with an array of iconic British music from across recent decades: The Beatles, The Rolling Stones, AC/DC and Happy Mondays among them. And so went this concise, unsurprising collection, an ode to various tailoring styles: crisp Crombie coats and drainpipe pants that evoked the Sixties; lean suits with flaring pants in muted plaids reminiscent of the Seventies.

The big surprise was the vivid color as models loped around the Bourse de Commerce in woolen topcoats in kelly green or a fuzzy shearling dyed a searing shade of color. Zippered track tops and polka dot Vans-style shoes added a Nineties accent.

Stripes added an extra element of dynamism, streaked boldly down one side of overcoats, ringing turtlenecks or appearing as decorative piping on the cuffs and front pleats of dark suits.
Paisley patches on distressed jeans added an additional touch of groovy.