The designer channeled Twin Peaks and The Breakfast Club for his fall collection. 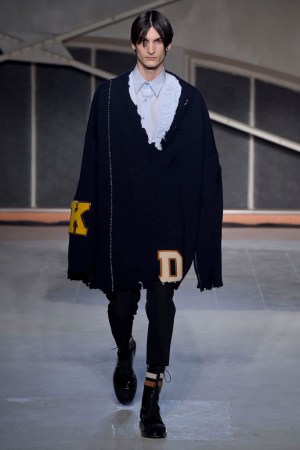 “I always think about nightmares, and I have always been interested in horror movies,” Raf Simons divulged backstage after an arresting show where two worlds collided: cue “Twin Peaks” meets “The Breakfast Club,” David Lynch’s mystery series versus the idealism of American youth.

In horror movies, the preppy guy always goes first, and so it made sense to make him the sole character for fall.

Simons referenced his own past, sending out a bunch of school boys in heavily distressed, oversize sweaters eaten up by moths at the hems and V-collars, with their sleeves dangling beside the models’ knees. They were matched with buttoned-up white shirts and slim-fit three-quarter-length pleated pants for extra contrast. In the outerwear department, maxi puffers and tailored check coats took the lead.

Simons’ jittery brat pack looked like the perfect motif for Cindy Sherman’s “Untitled Horrors” series, which was part of the designer’s mood board this season. “But I wasn’t thinking: ‘Ah, what kind of story could I make of Cindy Sherman and ‘Twin Peaks’?,’” he said. “It’s very fragmented in a way. We all have our language, and so we do that automatically.”

His idea was more about setting the right mood, which was helped by the voice of composer Angelo Badalamenti, who scored the music to many of Lynch’s movies. It even made Simons speak softly. “It’s David’s birthday today. I didn’t know it, but I’d like to think that I’m dedicating the show to him,” Simons said.