The collection was primarily inspired by the first Asian Games in China, in 1990. 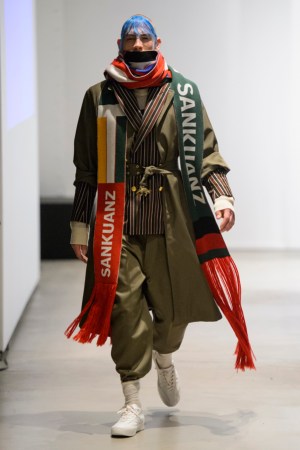 Taking a cue from the 1990 Asian Games held in China for the first time, designer Shangguan Zhe reworked track pants, hoodies and jackets, often in fabrics such as velvet, intarsia and light nylon. The games’ cartoon mascot PanPan the panda decorated some of the pieces, as did dragons and other illustrated, imaginary creatures.

Zhe said he was inspired by the juxtaposition of how glorious the games seemed on the surface – a symbol of China’s opening to the world – and how the reality of day-to-day life, which he lived as an adolescent, wasn’t in sync.

Zhe’s often-oversize styles gave a nod to the extra-large sporty uniforms of students in the Nineties, when material was scarce, so they could be worn for many years.

In another twist, Zhe contrasted the sportswear with more sartorial pieces, such as classic jackets, which have now become a staple of the Sankuanz label.